Halloween is about a month away and stores will be lined with these electric pumpkin carving tools.

I thought it was time I revisited a project I started Halloween of last year. The below is the story and build, but the TL;DR can be found in this video.

I created a 3D printed part that allows you to swap rakes in the Pumpkin Master electric pumpkin carver.

You can check out the video then jump to the STL file and print your own: https://drive.google.com/open?id=0BzY3yLosRyyxMzAxdFo3Y3ZHTUU


Almost a year ago I saw this Tweet by @indiecom showing @jimylongs modified electric pumpkin carving saw that was turned into a power rake. It was dubbed the pumprake or pumpkey depending on who was commenting. I am still not sure of the official name, but I liked pumprake - https://twitter.com/indiecom/status/728806259248369664 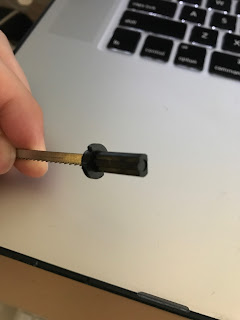 I wanted to make one, but I also decided I wanted the rakes to be interchangeable. How could I make it easy to swap a city rake for a wave, etc? I went online and found one of the electric pumpkin carving tools and noticed each saw blade had an identical small plastic end. I could model this in TinkerCad to create an adapter for modified rakes in the electric carver.

After much consternation with a set of calipers I was able to model and 3D print the plastic end for the saw blades. These can be used to hold modified rakes making them interchangeable. 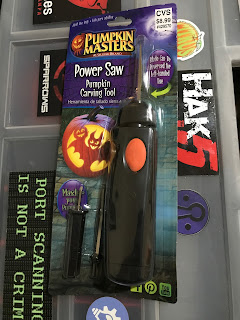 Just in time for Halloween I’ve tested the parts on the old version and new version of the Pumpkin Master carving tools. You should be able to find these carvers wherever fine Halloween gourds are sold.

Check out the video above. I also documented the build process in this blog post. If you are just interested in the STL file to make your own click here. The STL can be modified in TinkerCad, printed at home, or sent to services like Shapeways for printing. I use TinkerCad and then send it directly to Shapeways for printing from inside the TinkerCad interface.

Happy Halloween and Happy Picking! Tweet @eanmeyer to let me know if you print the part and how it worked for you!